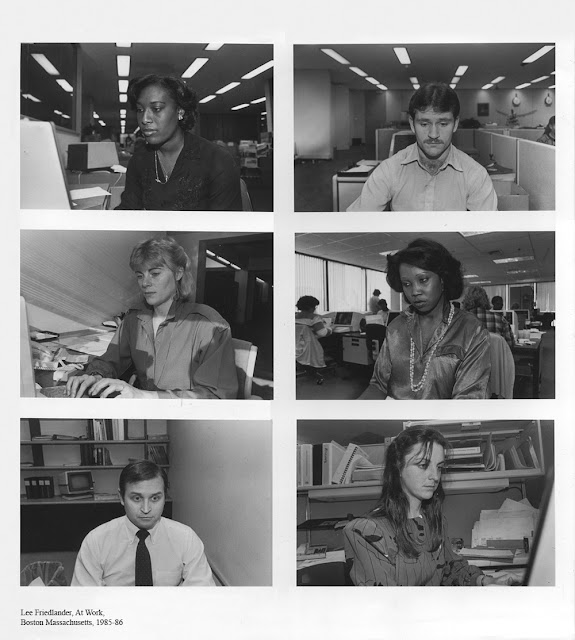 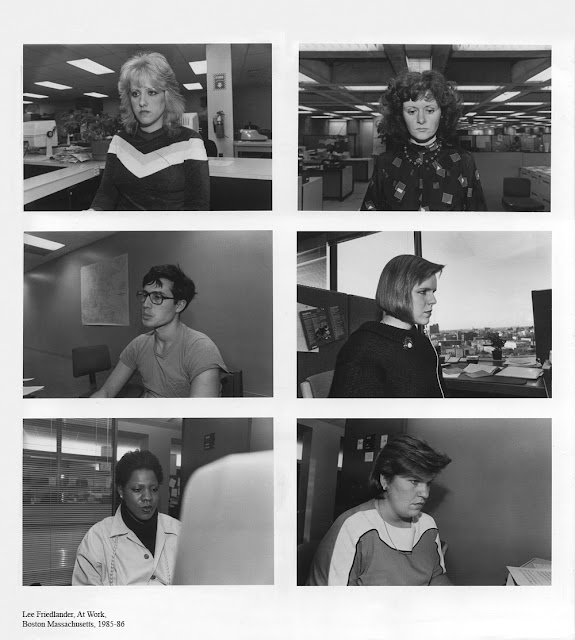 In one of our theory lectures titled A History of Photography via the Worker, we were taken through a
number of images from a vast range of photographers who had all captured people at work. One image that really caught my interest was a photograph taken from a six part series by Lee Friedlander titled At Work. Friedlander is well known for being a prolific photographer who has chronicled the American social landscape. His images focus on the way our modern society looks, particularly in the US where he was based and he explored this idea of a 'cultural landscape' through photographs of workers, city life, store fronts and much more. Friedlander's images are particularly special I feel because of the way he is able to take in all of this visual information from these urban environments, and interpret and present it in a very formal and simplistic way with his photography.

Although the At Work series consists of six individual projects, here I am referring to At Work but just focusing on the MIT computer workers images in Boston, as they are the ones that particularly stood out to me and are my personal favourites that I have come across in this series by Friedlander. They are the photographs I would like to talk about in more detail as the subject matter across At Work is quite varied, and I would rather focus more specifically on this very uniform series of photographs in presenting its subject matter.

As I was looking briefly into the At Work series I found myself becoming more and more interested in the way these photographs came to be. As the more you look at them especially as a series, the more sinister they become as the social observation that Friedlander has made and visualised for us as an audience, reveals something very eye opening and concerning for our modern society in general, even today.

Friedlander's approach to his subject matter in At Work is very alternative in how he is showing us workers in ways we aren't used to seeing them. I think it is particularly interesting with the MIT computer workers photographs, as compositionally the workers are presented very formally to us, however their expressions are incredibly lacklustre as they gaze into their computer screens, and some of the workers look barely conscious. I do think these photographs are very powerful and the way humour is used to confound an audience really catches you off guard as a viewer.

These photographs in my opinion are incredibly thoughtful especially as the subject matter is ordinarily seen as something more mundane and uninteresting. However these images are so revealing in showing how our work moulds us and is a part of who we are. So many people's jobs require them to look at computer screens for long periods of time and this series really forces the audience to confront the possible wider implications of this having become conventional in our modern society. It also begs us to ask questions about the relationships we have with objects in general, and coming across this series in 2016 really makes me think about how serious it is that so many of us are constantly carry a mobile phone around with us, and rely on technology not just for work but also in our free time.

In terms of what I can take from this series in relation to my Person at Work images, I think that observing the formal visual qualities of this work and also analysing the perspective Friedlander has taken on his subject matter, gives me a lot to think about in terms of how I can more creatively and thoughtfully capture people at work. The image above for example of a woman sat in front of her computer is brilliantly composed, and these leading lines created by the lights above her draw our eyes also to the wider context of this image, in where this woman is working as well as the concerning vacant look on her face.

The use of anonymity in curating his images is quite interesting I think as not naming the person he photographed takes away the photographs being about individuals and instead they become about a group of people, especially in how he puts them all together in the photo book as a series rather than isolating singular images. This I feel goes back to this idea of capturing the cultural landscape, and in this case it shows the relationships between those in modern culture and their computers that they predominantly work with. In terms of my work for this brief which is intended to be works of photojournalism it would be inappropriate to not name my subjects but I do think looking at this more fine art, uniform series of images has given me a lot to think about in terms of approaching subject matter and how creative I could be in future projects.
Posted by Elena Bridges

Email ThisBlogThis!Share to TwitterShare to FacebookShare to Pinterest
Labels: person at work, research